Getting the Engagement Ring Back in Virginia

On November 23, 2012, a man, "P" got down on one knee in Charlottesville, Virginia, and asked "K" to marry him.  He had already spoken to her mother and requested permission for her daughter’s hand in marriage and Mr. "P" wasn’t empty handed for the marriage proposal.  He presented Ms. "K" with a ring valued at over $46,000.  Ms. "K" accepted his marriage proposal.

Two years later, circumstances had changed.  Ms. "K" called off the engagement and moved out of the apartment they had been living in together.  Mr. "P" demanded Ms. "K" return the engagement ring, but she refused.

Unfortunately such a scenario is not uncommon and the question of what happens to an engagement ring in a situation where the marriage is called off has perplexed courts in Virginia until recently.  Judge Thomas D. Horne of the Loudon County Circuit Court was tasked with ruling on the case between Mr. "P" and Ms. "K" when Mr. "P" made a Motion for Detinue.  A Motion for Detinue is made when someone seeks to recover personal property.  In Virginia the governing statute is Va. Code Ann. § 8.01-121 and it requires that you show: (1) a right of property in the property sought to be recovered; (2) the right to the property’s immediate possession; (3) the property must be capable of identification; (4) the property must be of some value, and; (5) the defendant must have had possession at some time prior to the commencement of the action.

The area of confusion in Virginia’s courts has been reconciling detinue actions with Virginia’s Heart Balm Act.  This act prohibits legal recourse for the breach of a promise to marry.  As Judge Horne noted, some Virginia Circuit Courts interpreted the Act to prohibit the return of property given on the condition of marriage.  For example, in Holmburg v. Ferrell, a court denied the plaintiff’s request for the return of a vehicle given to the defendant on the condition of marriage.  However, Judge Horne rejected this interpretation and instead ruled that the Heart Balm Act was only intended to prohibit actions for damages related to the breach of the promise to marry, it was not to stop the return of engagement gifts passed between the parties.  He stated that finding otherwise would lead to unjust enrichment, something the legislature would not have intended when passing the Heart Balm Act. 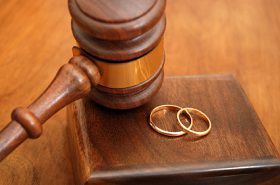 The Virginia Supreme Court has also addressed this issue in Pretlow v. Pretlow.  In that case the court held that upon the breach of an engagement to be married, gifts made in contemplation of marriage may be recovered due to their conditional nature.

So what does this all mean for Mr. "P" and Ms. "K"?  Well, Judge Horne ruled that the Heart Balm Act does not apply to engagement gifts so the ring was recoverable.  Further, he found that all of the elements of a detinue were proven.  In other words, Ms. "K" had to return the ring.  The law in this area should be clearer now going forward.  You cannot recover damages because the person you asked to marry you broke off the engagement, but you can recover any engagement gifts so long as you meet the criteria for a detinue action.

While the status of an engagement ring prior to marriage can be tricky, there is more clarity when it comes to engagement and wedding rings during a divorce.  For the purposes of a divorce in Virginia the rings would be considered “marital property.”  This means they fall into the group of property acquired as a couple during the marriage and would be subject to terms dividing that form of property.  For example, generally each spouse in a divorce receives half of the martial property.

The ability to recover an engagement ring can be a complicated issue.  Prior to this year some courts would order rings to be returned, and others would not.  If there are any fault-based reasons that the engagement was called off, those too could alter the resolution.  The attorneys of Smith Strong, PLC can assist you in preparing a Motion for Detinue to recover an engagement ring, or any other engagement gift.  Please call one of our offices at 804-325-1245 (Richmond) or 757-941-4298 (Williamsburg).