Financial circumstances, income, and anticipated costs of living are some of the factors considered by spousal support orders. But things change.  Former spouses change careers, move, acquire new job skills or levels of education, or alter their life circumstances in a multitude of ways.  When such changes occur, the parties to a support order may petition the court to change or lower spousal support payments to account for the change in circumstances.

A 2014 Loudoun County, Virginia case, Blalock v. Blalock, held that a wife’s relocation to Fort Gibson, Oklahoma meant a lower cost of living than in Northern Virginia.  Therefore, the court lowered the husband’s payments of spousal support to the wife.  The former husband argued for a reduction of spousal support for multiple reasons, including his former wife’s significantly reduced cost of living due to her relocation and his own decline in income following a job change.

Relocation from a Pricier Place Can Affect Your Spousal Support

At the time of the Blalock divorce, the wife continued to live in the marital home in affluent Loudoun County.  However, she subsequently sold that residence and moved to a home in Fort Gibson, Oklahoma, a community with a significantly lower cost of living.  Eventually, the wife paid off the mortgage on the Oklahoma property and therefore had no additional expenses related to that home.  During the same time frame, the husband changed jobs and, consequently, his salary decreased by $10,000.

Lowering Support Payments After a Move 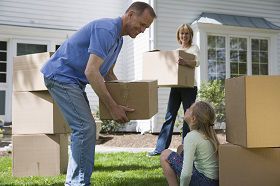 Although the Blalock court found “nothing in the record to suggest a termination of spousal support was appropriate,” the court did order a substantial reduction in the former husband’s support payments in response to the parties’ significantly altered circumstances.  Specifically, the court eliminated his prior obligation to pay a portion of his bonus to his former wife.

Another factor that prompted the Blalock ruling reducing the husband’s support obligation was the court’s decision to impute income to the wife.  On the basis for expert testimony from a vocational specialist introduced by the husband, the court determined that $20,000 in annual income should be imputed to the wife following a specified period of training, thereby further equalizing the relative financial postures of the former spouses and reducing the husband’s support obligation.  In other words, the husband argued that his wife had enough time to better herself through education and training and had failed to do so.

Imputation of income is a concept meaning that, while a party to a support arrangement may not actually be earning a designated amount, it makes sense under the existing circumstances to attribute that amount of earning potential to that party – perhaps because they have earned that amount in the past or have the demonstrated potential to earn that amount because of education, training, or a particular skills set.

Attributed earning potential can be based on a court’s consideration of a particular party’s educational and training profile or, more generally, on Department of Labor statistics or plain common sense.  Whatever the basis, imputing income to one party can be a significant factor in the initial terms and the revision of court-ordered spousal support arrangements, especially if there is income disparity between the parties.

The Blalock case stands as a very practical reminder of the need to consult with an experienced domestic relations attorney whenever the material circumstances of either party to a spousal support order change.  Relocations, job changes, and revisions to earning potential as a result of educational or training accomplishments are but a few of the lifestyle and financial changes that are likely to provoke adjustments to spousal support obligations.  The Blalock ruling also makes clear that expert testimony frequently is critical to a court’s determination of when fiscal circumstances or vocational factors warrant revisions to support orders.