Smith Strong, PLC, during your divorce, will work to ensure that support is appropriately addressed in your divorce matter. The firm often relies upon the expertise of forensic accountants to locate hidden accounts. Forensic accountants research, locate, and value marital assets. They determine what is considered to be a part of the marital estate by looking at everything the couple owns individually and jointly, calculate marital debts,  liabilities, and the respective share.

This usually involves forensic accountants looking for dark pools of hidden resources. A spouse may try to hide assets to avoid consideration in the calculation of spousal support or division.

In the following case, a spouse unsuccessfully tried to hide assets from his ex-wife.

In 2014, a couple filed for divorce. The husband worked as a marketing manager and was a W-2 employee for tax purposes. The wife hired a forensic accountant, through her attorney, to value the marital estate and determine her husband’s income. 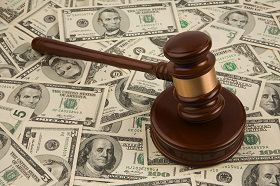 Based on the forensic accountant’s calculations, an amount for temporary support was calculated based on the husband’s current income. However, the husband received a raise the next year.

Instead of openly disclosing this new wage, he decided to increase his federal withholding taxes each pay period. This effectively reduced his bi-weekly paycheck to the same amount as it was when the initial support order went into effect (based on his original income level).

This made it appear that he did not in fact get a raise and was making about the same as he had been when the initial support order was entered.

After taking a closer look into his finances, it was determined that he had received the raise and instead chose to have a greater amount of each paycheck taken out for tax purposes.

The Tax Code prohibits this aforementioned behavior. Internal Revenue Code section 6702(a) states, “… an amount of withheld income tax or other tax that is obviously false because it exceeds the taxpayer’s income as reported on the return or is disproportionately high in comparison with the income reported on the return…” is prohibited.

The attorneys at Smith Strong, PLC use the expertise of forensic accountants to help uncover hidden assets for their clients facing a divorce.