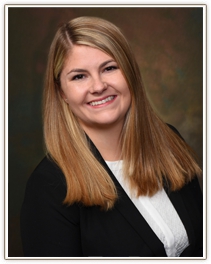 Emily Messer practices family law, including complex divorce, custody, and support matters, and estate/fiduciary litigation, including POA/fiduciary disputes, guardianship/conservatorship actions, will/trust contests, fraud/breach suits arising from elder law duties or in the handling of estates.  Previously, Emily was with a highly regarded firm in Northern Virginia, which had a reputation for handling high net worth divorce matters and complex custody disputes. Before entering private practice, Ms. Messer completed a clerkship with the Honorable David Bernhard of the Fairfax County Circuit Court. Her clerkship provided Ms. Messer with a valuable opportunity to analyze a myriad of aspects of Virginia family law as well as to witness both successful and unsuccessful litigation strategies.

Ms. Messer is a New Jersey native and received her undergraduate degree in economics and psychology from American University. Ms. Messer went on to obtain her law degree from William & Mary Law School where she served as the Managing Editor of the William & Mary Journal of Women & the Law. During her time at William & Mary, Ms. Messer also worked in the Virginia Coastal Policy Center and served as an intern at the U.S. Attorney’s Office in Washington, DC.

Ms. Messer is an active member of several local and state bar associations. She previously served on the Board of the Young Lawyers Section of a county Bar Association.

Happy Client Selfies Are Not Required At Smith Strong, But Take A Look At These Happy Clients